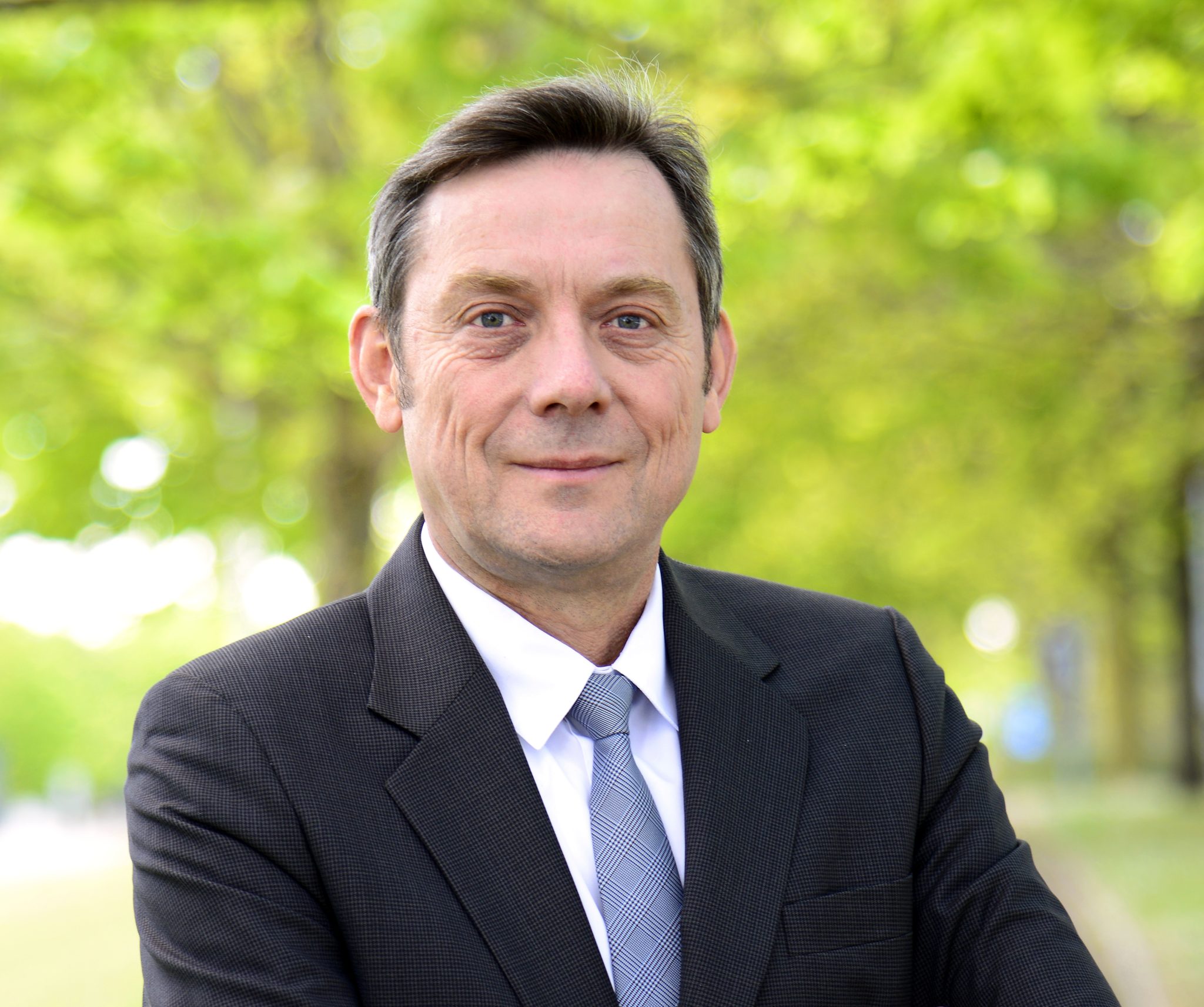 Almost 5 years after the opening of the South European Atlantic high-speed railway line between Tours and Bordeaux, LISEA has firmly established itself in the French and international railway landscape. High-speed railway innovative expert, LISEA – together with its partners and stakeholders – wishes to contribute to its territories’ economic revival, to the upgrading of the railway system. 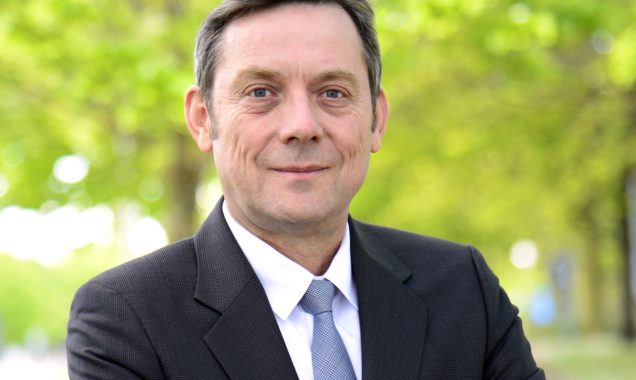 IMPROVING MOBILITY AND CONTRIBUTING TO OUR TERRITORIES’ REVIVAL

Railway transport meets climate challenges, social and territorial cohesion as well as the economic growth of territories. Therefore, at LISEA, private infrastructure manager for public railway, we do our very best to conciliate the increasing demand for mobility and the preservation of the environment both on a local and European scale. 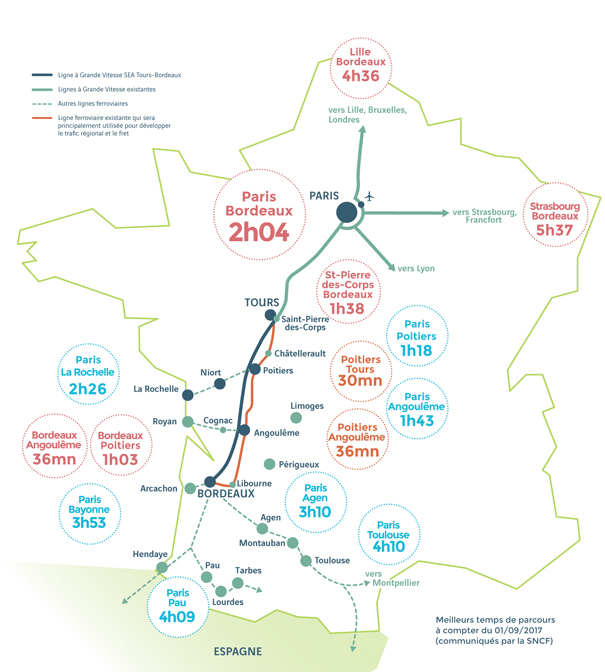 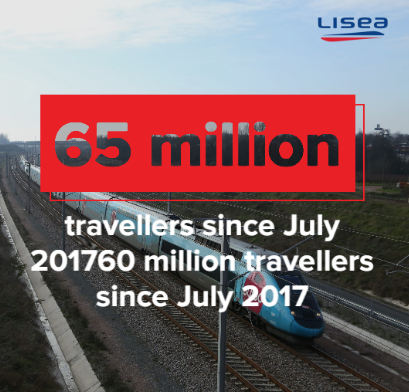 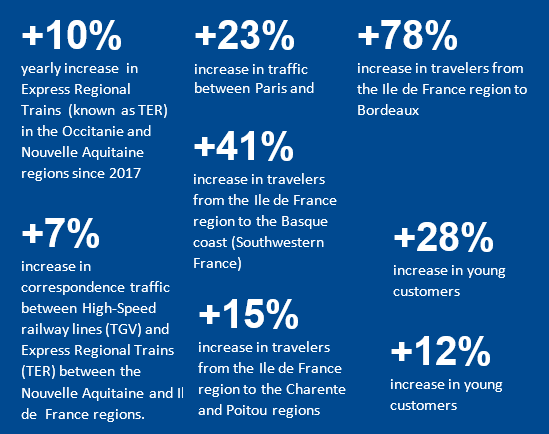 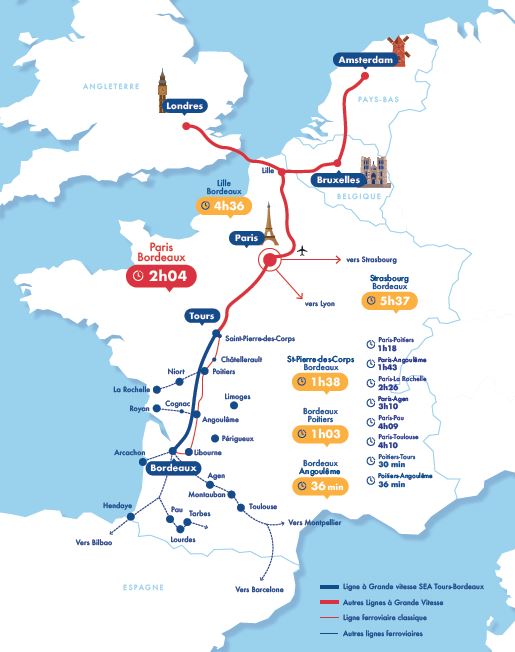 A COVERAGE WHICH STRENGTHENS THE TERRITORIAL DYNAMIC

Encouraging more mobility while connecting territories and fostering their development is the gist of LISEA’s mission.
Therefore, the company contributes to the development of long-distance connections – namely European – as much as it contributes to local connections, thereby enhancing a dense territorial coverage in all the areas which are crossed.
The 38km of railway connections to the national rail network enable the High-Speed Railway line (or LGV) to reach Western-France provincial towns such as Poitiers, Angoulême or La Rochelle and bear witness to the willingness to bring the high-speed railway experience to all the area.

A new trans-European link – an opportunity for European metropolitan areas

The European high-speed network is also structured around the South European Atlantic High Speed Railway line (or LGV SEA), along the Atlantic coast – between Northern Europe and the Iberian Peninsula. Since it first went into operation, the commercial and technical success of the line have consistently enhanced its appeal. For instance, in 2019 Thalys suggested a summer line which would connect Brussels to Bordeaux in 4hours. An offer which was a great success as proven by the 94% occupancy rate of the trains. A real opportunity for these two major European cities. 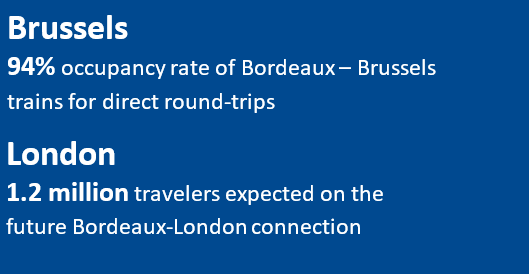 A SUCCESSFUL OPENING TO COMPETITION

The opening to competition of high-speed railway lines in December 2020 led to the positioning of both French and European operators on the domestic market and LISEA has, for the past 5 years – through a proactive strategy – paved the way to favour the arrival of these new entrants.
In that respect, LISEA is currently working on a maintenance facility project in the South-West of France which is due to be ready by 2026. Coupled with existing structures, this initiative should allow us to meet the increasing need for mobility and boost the economic attractiveness of the southwestern French territories.

For LISEA, the arrival of new railway operators on the domestic market represents an exceptional opportunity to meet the increasing need for mobility throughout its territories. 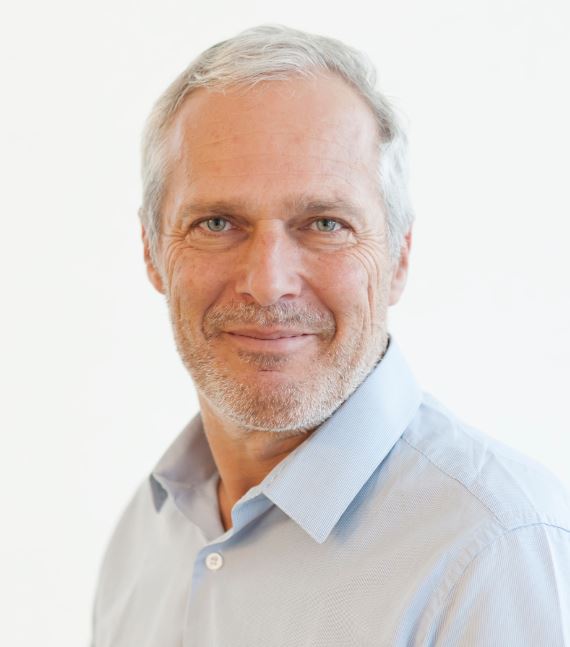 LISEA supports its approach to ecological transition on the major principles of sustainable development – such as defined by the United Nations – and on the objectives which stem from it. Namely in social and societal matters.
LISEA’s approach revolves around three main challenges faced collectively by all its employees: 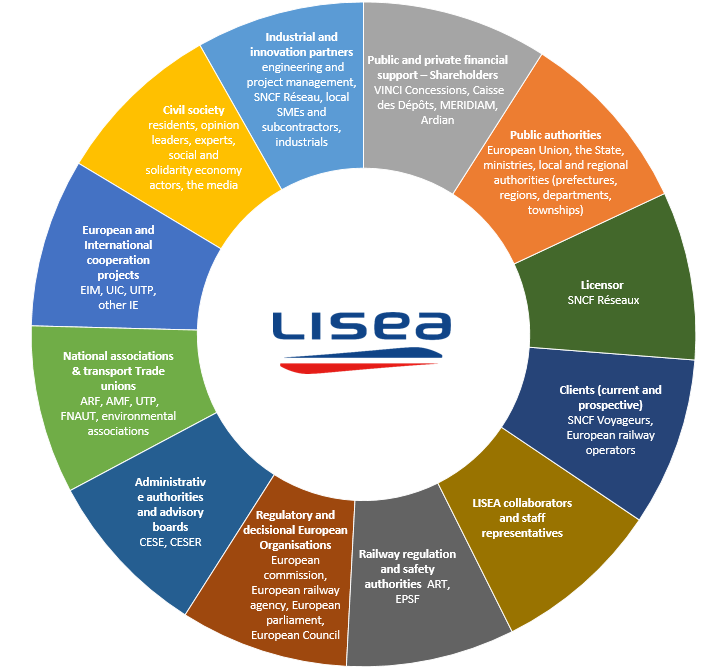 To limit the ecological footprint of the highspeed railway line on the areas it crosses, LISEA has committed – ever since the early construction phase – to an important avoidance, reduction, and environmental compensation program.
Stemming from LISEA’s contractual and regulatory obligations and developed in full consultation of concerned naturalistic structures, this program is subject to a long-term follow-up. Chaired by the Nouvelle-Aquitaine region prefect, the Tours to Bordeaux high-speed railway line environmental compensation measures monitoring committee met in Guizengeard, Charente on November 30th. Pursuant to the State’s validation of the 3 .800 ha of environmental compensation measures for the South European High Speed railway line (LGV SEA), LISEA is now in charge of monitoring and managing the project until the end of the concession contract in 2061.

LISEA’s process relies on the guiding principles of sustainable development such as defined by the United Nations. 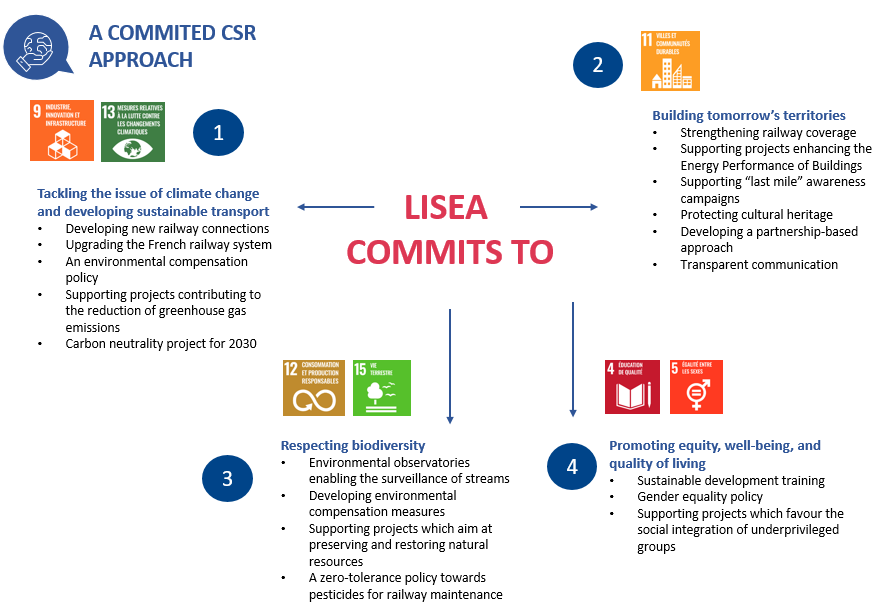 Daily constructive discussions with our stakeholders

Permanently encouraging constructive discussions with all our internal and external stakeholders enables LISEA to clearly identify their main issues and therefore better prioritize its actions. As an agile company, LISEA honours its commitments towards its employees in terms of work life quality. The introduction of ESG criteria in the company’s CSR strategy has also benefited the company performance.

LISEA also has a security and sustainable development policy as well as an ethical charter which were updated in 2021. 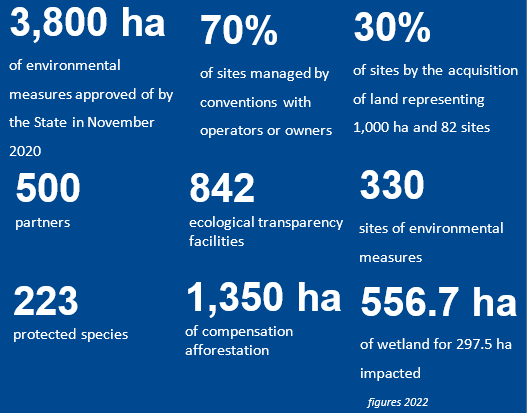 Starting and setting-up new companies, new markets, speeding up urban and real estate projects, developing business and leisure tourism, etc. The socio-economic observatory created by LISEA in 2012, analyses the different aspects of our territories’ regional attractiveness Its purpose : studying and broadcasting the South-European high-speed railway line’s socio-economic from its construction to its early years in operation.

The South European Atlantic Fund for the transition of territories

The South European Atlantic Fund confirms the commitment made by LISEA and MESEA in 2012 and maintains 3 areas of operation: solidarity, carbon and biodiversity – areas previously supported by the LISEA Biodiversity and LISEA Carbon & Cohesive Path Fund foundations. With a 3M€ budget, LISEA South European Atlantic Fund’s first call for expression of interest – « supporting local and sustainable agriculture » – is launched in the spring of 2021. Following the December 2021 Board meeting, the Fund selected fifteen winning projects, contributing to the solidarity-based and ecological transition throughout the six French departments crossed by the high-speed railway line.

Created in 2012 to assess the efficiency of the implemented measures, to enrich our environmental knowledge, improve our practices and develop our experience data in order to reinvest it in key future infrastructure projects. The Observatory draws on recognized regional and national experts’ research and has structured its approach based on 6 main themes: water, natural environments, landscapes, compensatory afforestation, land use and invasive vegetation. Its first studies have shown promising results for the protection of endangered species and the preservation of biodiversity. 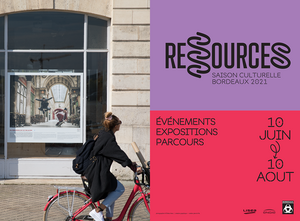 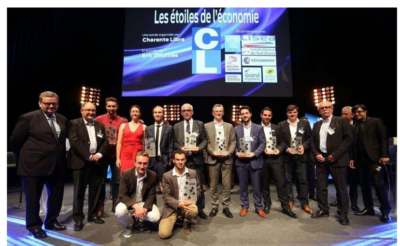 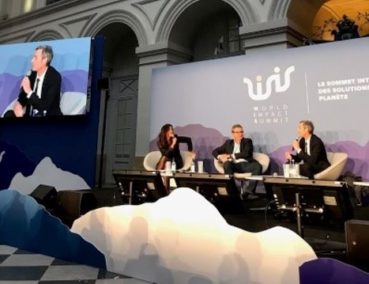 Making culture accessible to all

After « Paysages » (Landscapes) in 2017, planned for the arrival of the high-speed railway line in Bordeaux, « Liberté ! » (Freedom !) in 2019, LISEA renews its support to the Bordeaux cultural biennial with « Ressources » (Resources) from June 10th to August 10th 2021. A cultural season which took place in two parts: a first act in June which focused on the reopening of museums and exhibitions, and a second act in July with the opening of festivals and live shows, enabling the Bordelais to get together around over fifty different artistic proposals. This season has given the 300.000 visitors the opportunity to rediscover areas which used to be farmland, industrial space, or railways and which were reinvented for the occasion.

Sharing our experiences and commitment to ecological transition

In 2021, LISEA took part in the Word Impact Summit which hosted thousands of visitors online. During the World Impact Summit, which took place last December 2nd and 3rd in Bordeaux LISEA took the opportunity of a round table dedicated to the balance between preserving economic balance and the regenerating of our ecosystems to share its experience feedback.
Being dedicated to local development implies working hand in hand with the companies which dealt with the pandemic in an exemplary manner. Therefore, in October 2021, LISEA renewed its participation to Economic Stars (Étoiles de l’Économie – see © photo above: taken from the newspaper La Charente Libre) .
This year, the event will award seven companies from the Charente region as well as an entrepreneur of the year. Stimulus, transmission, creation, international/export, innovation are among the rewarded categories. Linking in with its commitments, LISEA will present the award for sustainable development.

Fostering railway transport’s key position in the future of mobility

LISEA is one of the 10 founding members of the Ferrocampus® association – the ecosystem of railway excellence – together with the Nouvelle – Aquitaine Region and the SNCF. In the future, the association will deal with needs such as railway training, research and experimenting together with the sector’s major players and the Universities of Nouvelle-Aquitaine.

Ferrocampus® : meeting the challenges of the railway sector and improving local railway coverage

The importance of a promptly effective opening to competition in France

Together with elected officials, parliamentarians, and sector experts, LISEA takes part in the considerations and debates connected to the stakes of increasing national and European mobility of the social and economic development of its territories, of the railway system’s modernization and the opening to competition. Therefore, in 2021, European Year of Railway Transport , LISEA took part in :

– The Future Transport (Avenir Transports) association meetings, an opportunity for LISEA’s president to remind the audience – on December 14th 2021 – the importance of an effective implementation of the opening to competition in France through collective involvement: railway operators, infrastructure managers and elected officials.

– The debate hosted by the AGIFI (French Association of Independant Railway Infrastructure Managers) entitled “What can be done to address the issues of modernization and railway infrastructure development in France and around Europe? “ Click here to watch the debate

– LISEA also remains an active stakeholder in both French and European railway bodies (Coopere, PRIME, UIC, EIM). Our goal: remaining actively involved in the development and effective operation of the European railway system while guaranteeing a high level of security and railway interoperability and improving the sector’s competitive position.

Performance, benevolence, and openness are at the heart of LISEA’s corporate vision. Such are the values which also apply to our commitment to a better quality of working life to foster our collaborators’ well-being. 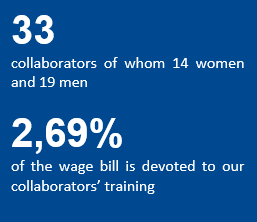 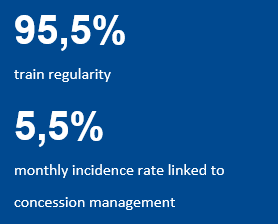 INNOVATING: FOR THE SAFETY OF ALL AND RAIL PERFORMANCE

Although the upgrading of the French railway system is one of LISEA’s major challenges, the infrastructure’s performance and security are part of its top priorities. It is with these aims in mind that LISEA relies on innovations developed with its partners and strives to keep-up the highest possible safety level and to improve the line’s sturdiness and industrial & operational performance.
Read More

For both LISEA and MESEA (line maintenance manager) innovation is at the heart of their performance-centred approach which is reflected in the development of information systems and specific measures thus capitalizing on the harnessing of available infrastructure data. SEACLOUD, the data platform currently being developed by both companies is showing promising results since the implementation of artificial intelligence models has allowed us so far to categorize 81 % of the incidents of trains having completed at least a portion of their South European Atlantic journey with a reliability rate exceeding 94 %. It has also enabled us to increase the reliability of the weekly analysis of rail geometry as well as the development of a degradation prediction model. A significant breakthrough towards predictive maintenance in order to maintain a high quality of service and to optimize life cycles. 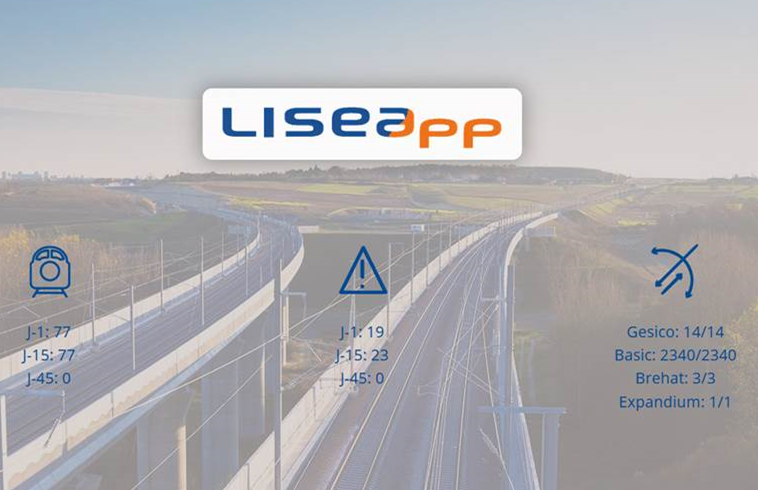